Metals are magnetic, right? Well, some metals aren’t, including certain types of stainless steel. Let’s find out which ones.

Are all Stainless Steel Magnetic? 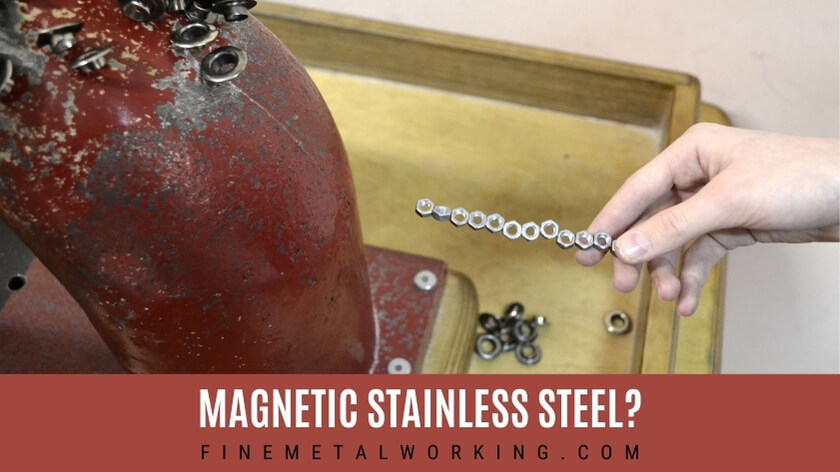 There are various types of stainless steel commonly available. Some of them are magnetic, and some are not. This property depends on several aspects, including alloying components and crystalline microstructure.

Increasing the chromium content to around 18% and adding nickel at about 10% to the alloy changes the microstructure to austenitic and makes the metal non-magnetic. This is the most commonly used stainless steel. The chromium increases the alloy’s corrosion resistance, while the nickel improves the grade of stainless steel.

The two variants of stainless steel most commonly used are 304 and 316, both paramagnetic. Paramagnetism is a phenomenon where metals generally display non-magnetic behavior, except when in the presence of a powerful magnet. Here, the magnet’s movement relative to the metal induces an electrical current inside the metal, causing it to react to the metal. This induced magnetism disappears when the magnet is removed.

304 stainless steel has an austenitic microstructure and contains chromium and nickel at minimum 18% and 8%, respectively. This metal could contain other alloying elements in trace amounts, including carbon, manganese, phosphorous, silicon, and sulfur.

316 stainless steel is alloyed mainly with molybdenum at 2% and a few other alloying elements in trace amounts. These include carbon, manganese, phosphorous, sulfur, and silicon.

304 stainless steel has a slight susceptibility to magnets, but this is not strong enough to be considered magnetic. Note that any process that this metal undergoes that changes its microstructure to ferritic will render it more magnetic. Here, we include cold working and welding. In some cases, austenite could also spontaneously revert to martensite at low temperatures. Martensite is also magnetic, so your beautiful 304 or 316 stainless steel will now interact with magnets.

Magnetic Properties of Stainless Steel 304 vs. 316

Although 304 and 316 stainless steel are non-magnetic, 304 is usually more susceptible to interaction with magnets than 316. These grades of stainless steel are most often used in the electrical industry, and you can’t tell them apart aesthetically. To differentiate between these two, you will require chemical tests since their physical properties are nearly identical.

Both 304 and 316 stainless steel are often used in applications that require non-magnetic metals that are corrosion resistant and have a high level of flexural strength.

During cold working operations, such as stamping, forming, forging, and surface polishing, 304 stainless steel usually becomes magnetic and more susceptible to corrosion, specifically in the worked areas. During this process, the austenitic microstructure reverts to martensite, which is highly magnetic and not corrosion resistant. Annealing treatment is used to reverse this magnetization and restore corrosion-resistant properties, reverting the microstructure back to austenite. Due to the high temperatures involved, this process is expensive, significantly increasing production costs.

316 stainless steel tends to be less magnetic than 304 stainless steel. This is due to their respective atomic microstructures, which are influenced by the alloying elements.

Stainless steel has one of two atomic structures:

The fcc atomic arrangement is inherent to austenitic metals. It is non-magnetic, while the bcc atomic structure is prevalent in ferritic metals, which are magnetic. Including manganese, nickel, nitrogen, and carbon in an alloy tends to favor fcc atomic structure. These elements are all present in 304 stainless steel.