Welding, brazing, and soldering are all specialist forms of metal joinery. Each is characteristically different through its application, practicality, and final appearance once applied and we shall compare these differences, as well as some similarities, in the following article. 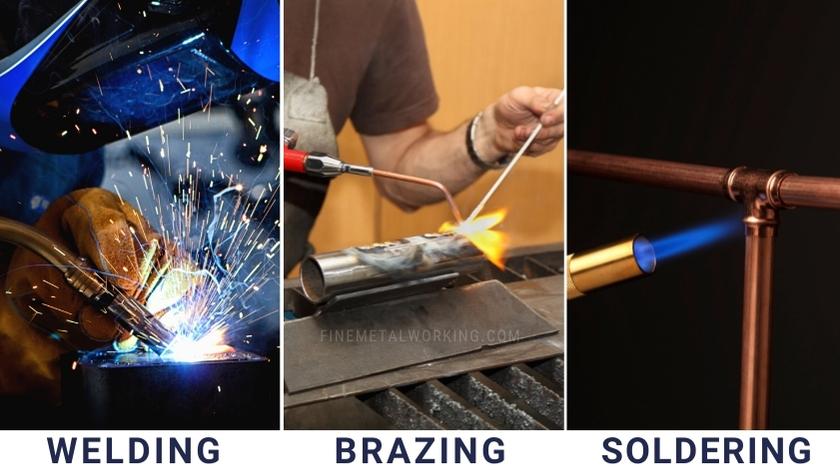 Differences in the Process

While both welding and brazing involve joining metals together, they do differ drastically with their means of doing so. Welding utilizes temperatures of up to 10,000 degrees Celsius created by an electrical connection between the workpiece and the welding machine. This connection produces heat which brings both the metal and the filler material to their respective melting point. This results in a final weld joint that is extremely strong as the filler material and subjective metal have been allowed to bond internally and externally. Brazing on the other hand does not utilize temperatures that will provoke the metal workpiece to melt. Heat is produced through propane or oxy-acetylene blow torch which will only melt the filler material. This filler material is the only active bond between the two metals. Brazing also produces a very strong bond between the metals and is typically considered stronger than the metal itself.

Welding or Brazing Which is Stronger?

A weld is generally stronger, but this depends on the given situation as brazing is far from a weak metal joining method. Welding and brazing both serve different purposes, and this comes into play in the different situations that a weld or a braze would be considered stronger, however, we would conclude that overall welding produces stronger joints due to the heat penetration that it delivers. Heat penetration and the complete fusion of metal simply don’t exist when brazing; the subject metal does not melt as it does when welding.

Try to view the strength of welds vs brazed joints like this: brazing is a process where the bond is made on the surface of the joint while a weld can penetrate right through the material and bond the two together completely at all points of contact. Despite this, brazing is still considered extremely strong and it is the optimal choice in a variety of circumstances.

When compared to the process of brazing, welding generally has the greater advantage of strength. As we previously discussed, welding produces intensive heat which forces metal past its melting point. Once the metal has melted and a “weld pool” has formed, the filler material is then added which allows the material to thoroughly fuse together.

Welding has a wider range of usefulness in its application as it can successfully and efficiently join metal of nearly all available sizes and thicknesses. Welding is, however, slightly more limited when it comes to extremely thin workpieces or when joining different metals together but nonetheless, it can still get the job done in most cases.

With a lot of modern technology and science regularly invested in improving welding processes, it is no surprise it is highly efficient in its speed. Processes such as MIG welding are highly productive, a welder operator can nearly weld for as long as he likes with the need of stopping to reload on filler materials.

Firstly, brazing is far more practical and efficient for joining different metals than welding is (for example stainless steel and carbon steel). This is because brazing does not melt and fuse metal together, as welding does. When different metals are combined, the potential for them to react in a negative manner is higher and weldability is low.

This is also connected to the fact that different metals not only contain different elements but also have different heat reactions and melting points. A good example is your carbide-tipped lathe turning tool or carbide-tipped circular saw blade, where the carbide is brazed onto the steel body. Carbide has a much higher melting point than steel.

Brazing only melts the filler material which is then placed onto the surface of the joint with the purpose of holding the materials together. The process of welding will always melt both metals together, which works well when done correctly, however, brazing is deemed to be much more straightforward and unproblematic when joining different metals.

Brazing proves to be far more economical than welding. This is determined by the fact that brazing requires less consumables and machine maintenance than welding. Brazing only requires filler rods and gas.

Alongside this, brazing produces very neat and clean joints. No secondary process is required post brazing to improve the aesthetics of the joint.

Brazing is excellent for joining thin sheet metals, something which welding can struggle to achieve efficiently. This is again connected to the fact that brazing does work at high temperatures and does not melt the metal workpiece. This completely eliminates the worry of over penetrating or warping/damaging thin steel and allows you, as the operator, to focus on producing a quality joint.

Techniques such as spot welding and laser welding can join sheet metals together, but they do have their limitations.

Differences in the Process

Soldering or Brazing: Which is Stronger?

As I have already mentioned, brazing is a process for joining metal that is significantly stronger than soldering which proves to be a great advantage in joining all types of metals.

Compared to soldering, brazing allows an operator to work with a wider range of material thickness; the higher temperature is the key factor in this. Soldering is far more limited in its range of application simply because it functions at lower temperatures.

Brazing is considered more skillful than soldering. Brazing takes more time and care to learn and generally, soldering is learned before brazing, therefore an employer will view a person who can braze as far more employable than a person who can only solder.

Due to its low heat, the process of soldering requires less filler material and energy to produce the required joint.

Learning to solder is very easy and this is why it is taught at schools before all other metal joining methods. Little time is needed to master the skill of soldering and once mastered, operation and control are predictable and easily managed.

Soldering can join much thinner material than brazing can, which proves to be highly useful within precision engineering projects.

Which Method is Best for Me?