We generally view metals as magnetic, but some metals aren’t magnetic. Why is this, and what causes metals to be magnetic in the first place? Let’s find out.

What Makes a Metal Magnetic?

Magnetism in metals comes from electrons that are unevenly distributed. This distribution creates magnetic dipoles by shifting the charge within the atom back and forth. In magnetic metals, these dipoles align, creating localized magnetic areas, each with a north and south pole. When most localized areas point in the same direction, they create a magnetic field, magnetizing the material. This magnetic force increases in strength as more domains align.

There are three types of magnetism in metals: ferromagnetic, diamagnetic, and paramagnetic.

Ferromagnetic materials are what we usually view as magnetic. These are strongly attracted to magnets and maintain this magnetism even when a magnet isn’t nearby. This is due to the presence of magnetic domains, as explained in the previous section.

Are all Metals Magnetic? 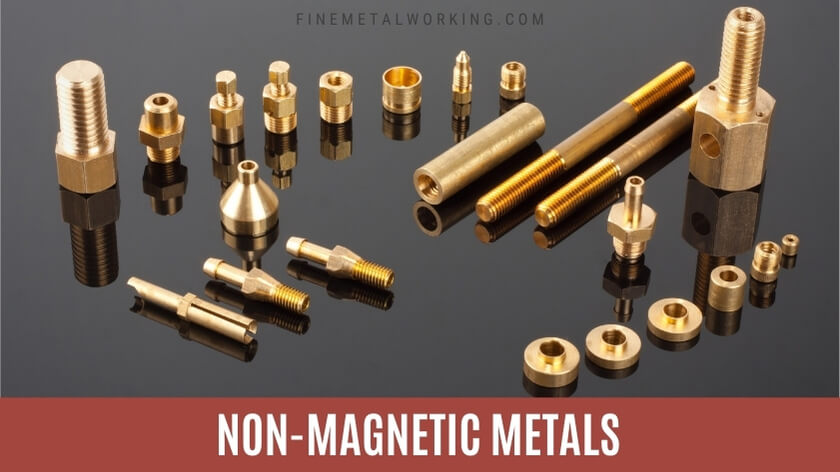 Aluminum isn’t magnetic under normal circumstances, but it does interact with magnets – we call this paramagnetism. This metal isn’t attracted to magnets, so a magnet won’t stick to aluminum. However, when a magnet moves close to aluminum, it causes an electrical field, which interacts with the aluminum. This phenomenon is called Lenz’s Law, after renowned physicist Emil Lenz. The interaction here is best illustrated by dropping a powerful magnet down a thick aluminum tube. The magnet will fall incredibly slowly as it experiences interference from the electrical fields created by its movement.

Like aluminum, brass isn’t magnetic under normal circumstances, but it interacts with moving magnets. Here, Lenz’s Law comes into play again. When brass moves relative to a strong magnet, it creates electrical currents inside the metal, which interact with the magnet’s magnetic field. This is best illustrated in an experiment using a brass pendulum and a strong magnet: When the magnet is absent, the brass pendulum swings fast. However, when a strong magnet is placed close to the pendulum’s path, it slows considerably and nearly stops altogether. Replacing the brass pendulum with a wooden one shows no interaction with the magnet, indicating that this interference is not physical but magnetic.

Bronze, an alloy of copper, tin, and occasionally trace amounts of nickel. Nickel is magnetic, and when present in large enough quantities, can make bronze slightly magnetic. However, bronze is generally not magnetic.

While copper is an excellent conductor, it isn’t magnetic. Copper is diamagnetic, meaning that it repels magnets. This is harnessed effectively in mechanically powered flashlights (shake lights). When you shake the flashlight, a magnet moves through a copper coil. Here, the repulsion between the magnet and the coil creates an electrical field, powering the flashlight.

Lead is not magnetic, but it can interact with powerful magnets in the same way that aluminum, brass, and copper do. This means that it is weakly paramagnetic. If a powerful magnet moves close to a lead pipe, it could cause the pipe to move.

Gold isn’t magnetic under normal circumstances and has long been considered entirely non-magnetic. Recently, however, a team of scientists found that gold can be temporarily magnetized under extreme heat in particular conditions.

Silver isn’t magnetic but will interact with strong magnets under the effects of Lenz’s Law. Here, as with aluminum and brass, the magnet’s movement relative to the silver creates small eddy currents within the metal. These eddy currents are small electrical currents that create interaction between the metal and the magnet, causing them to move.

While platinum is an excellent conductor, it is not magnetic. However, a team of scientists managed to induce a thin film of platinum to display ferromagnetic properties. Here, the team immersed the platinum in an ionic liquid and applying an electric field to it. This created an atomically thin layer on the platinum’s surface that was magnetic. This experiment was conducted in a highly controlled environment and is not easily recreated. So, it is safe to say that platinum is non-magnetic in everyday circumstances.

Zinc isn’t magnetic under normal circumstances, but it is paramagnetic, similar to brass and aluminum. Moving a strong magnet close to zinc causes small electrical currents to form. While these are not magnetic, they interact with the magnet, causing the metal to move relative to the metal.